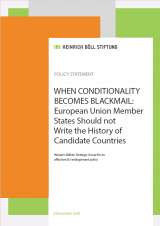 Citizen rage in Mostar - “The EU speaks to the mafia, but not to us“

Artikel
For twelve years, the citizens of the Bosnian-Herzegovinian city of Mostar have not been able to vote. Thus, Mostar is the only city in Europe in which the right on elections at the local level has been systematically denied. Now there is an agreement between those very extremist representatives who have been preventing the people from going to the polls for years. The deal was also supported by the EU – and the citizens of Mostar are asking indignantly why they were not involved in the political decision-making processes. And why questionable deals are promoted by the state institutions. The agreement, or so the accusations, is only cementing the destructive ethno-nationalism in the country.
By Marion Kraske

Bodo Weber: For the first time, Izetbegović and the SDA legitimized the third entity project with an agreement with the HDZ on Mostar

Senior Associate of the Democratization Policy Council Bodo Weber says that the agreement reached is not in for the future of Mostar or the whole of Bosnia and Herzegovina.
By Adin Šabić

Analysis
Why EU-integration? Why should the Western Balkans, a region where criminal networks have been gaining ground and corrupt elites have systematically captured state institutions for the benefit of their own criminal business models, enter the EU? Why, when human rights are trampled upon in the region, with manifestations of nationalist radicalization overall? One can hear these questions repeatedly in the political discourse.
By Marion Kraske

What direction for the Western Balkans in a more right wing EU?

Analysis
In anticipation of the upcoming European Parliamentary elections, the Europhobes of the far right have been warming up to launch an attack on the major achievements of the union. Some of these parties have established their electoral bastions almost everywhere.
By Marion Kraske